Millwall face off with the visiting QPR at The Den in the Championship clash on Tuesday.

Millwall
Millwall, buoyed by their previous result, will be hoping for more of the same after a 2-1 Championship triumph vs Cardiff City. A recurring feature of more recent Millwall games is the number of results with a nil in them. Taking their prior sextet of matches before this one, in 5 of them a wager on BTTS would have been a losing one. 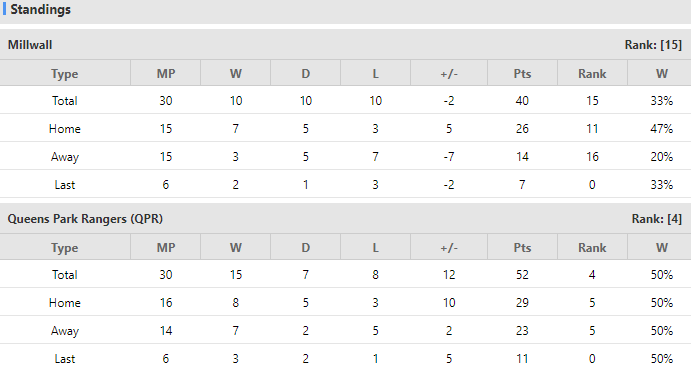 Queens Park Rangers (QPR)
Since a losing effort in their last game against Barnsley in Championship competition, QPR will be aiming to make amends here. Mark Warburtons Queens Park Rangers have found the back of the net a total of 8 times in the course of their most recent 6 matches. The total of goals that have been scored against them during the equivalent period adds up to 6.

Verdict:
Millwall have played well in their last three home games and were confident. The 1X2 first odds is 2.75-3.00-2.70, seems no clearly support to both side. Millwall should take points in this game.

Football England Championship Queens Park Rangers (QPR) Millwall
(Disclaimer：Any views or opinions presented are solely those of the author and do not necessarily represent those of NowGoal. We disclaim any responsibility and accepts no liability for any direct or indirect loss or damage arising from any inaccuracies.)