Liverpool will be the visitors at Turf Moor on Sunday for the Premier League fixture with home team Burnley.

Burnley
With only 1 win, 11 draws and 8 losses, Burnley are currently rooted to the bottom of the Premier League standings. They are on an 11-game winless run, and they had remained winless in 23 of their past 25 fixtures. Burnley recorded a 1-1 draw against Manchester United in the last match-day at home. In the league, only Norwich have scored fewer goals than them. 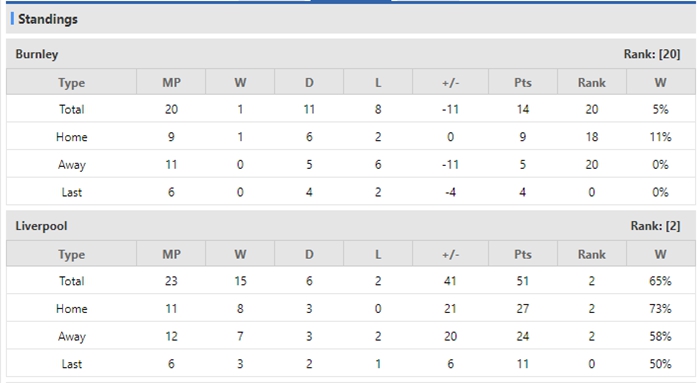 Liverpool
Collecting 51 points, Liverpool are in second place in the league table at the moment. They are also on a four-game winning streak, and they had remained unbeaten in 37 of their past 39 fixtures. The Reds registered a 1-3 win against Crystal Palace on the road the past game week. They have scored the most number of goals in the competition.


Prediction
Burnley were exceptional against Manchester United but are under immense pressure to make their games in hand. With Mohamed Salah and Sadio Mane back from AFCON, Liverpool will look to mount a late title charge in the coming weeks. Predict Liverpool to hold the upper hand going into this game.

Football English Premier League Liverpool Burnley
(Disclaimer：Any views or opinions presented are solely those of the author and do not necessarily represent those of NowGoal. We disclaim any responsibility and accepts no liability for any direct or indirect loss or damage arising from any inaccuracies.)