Leicester City
With 26 points from 21 games, Leicester City are currently 12th in the EPL standings, two points off Southampton in the top half of the table. They have now failed to taste victory in any of their last four games in all competitions, losing three and claiming one draw. The Foxes failed to find their feet on Thursday as they were defeated 2-0 by Liverpool. Before that, they were held to a 1-1 draw against Brighton Hove Albion. 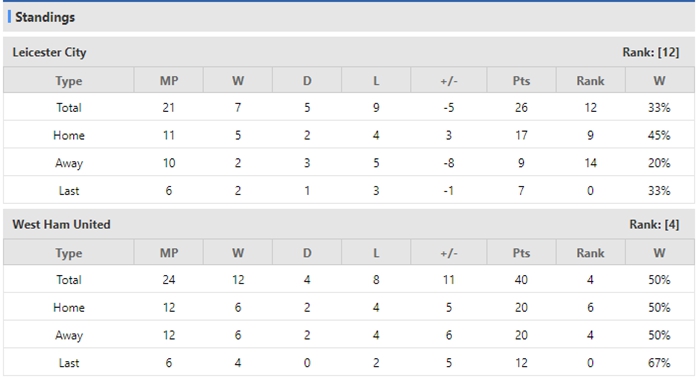 West Ham United
Clinging on to the final Champions League spot, West Ham currently occupy fourth spot in the Premier League table. They are on a two-fixture winning streak, and had won six of their last eight match-ups. The Hammer  recorded a 1-0 win in the past game week on home turf. This followed a 1-0 win over Kidderminster Harriers in the FA Cup which saw their two-game losing streak come to an end.


Prediction
Leicester City have suffered a drop-off in form in recent weeks while West Ham side have been dominant away from home this season. Expect the visitors come away with all three points.

Football English Premier League West Ham United Leicester City
(Disclaimer：Any views or opinions presented are solely those of the author and do not necessarily represent those of NowGoal. We disclaim any responsibility and accepts no liability for any direct or indirect loss or damage arising from any inaccuracies.)