Tottenham Hotspur
Four points behind West Ham United with three games in hand, Tottenham Hotspur remain seventh in the table. Tottenham have made a bit of a habit of winning one then losing one in recent weeks. They relinquished the lead twice against Southampton in midweek to end up on the wrong side of a 3-2 scoreline. Before that they beat Brighton Hove Albion 3-1 in FA Cup. 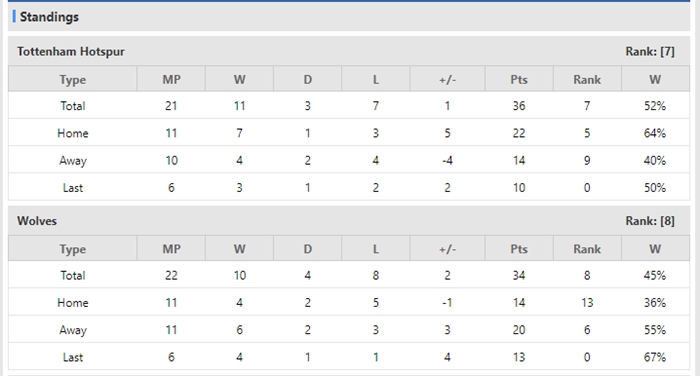 Wolves
Wolves are in good form, and are placed eighth in the table. They had also won four of their last five fixtures, and they are also on a three-game winning streak on the road. Wolverhampton Wanderers failed to beat 10-men Arsenal in midweek as they also squandererd the chance to close the gap with the top four. Before that, they recorded a 1-2 win on the road against Brentford.


Prediction
Tottenham Hotspurs defensive frailties have been exposed in recent weeks. Wolverhampton Wanderers have been formidable at the back and lackluster going forward. It’s trusted that a close match is on the cards and the spoils will be shared at the end.

Football English Premier League Wolves Tottenham Hotspur
(Disclaimer：Any views or opinions presented are solely those of the author and do not necessarily represent those of NowGoal. We disclaim any responsibility and accepts no liability for any direct or indirect loss or damage arising from any inaccuracies.)