Newcastle United
Ranking 17 place at the table, Newcastle have now accumulated eight points from their last 12 available. They are on a two-game winning streak and a three-match unbeaten run. Newcastle United come into this game on the back of a 3-1 win over Everton in the English Premier League. Only Norwich have conceded more goals than Newcastle in the whole competition. 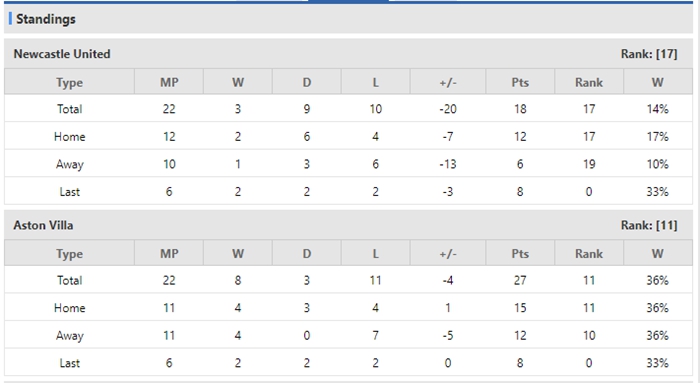 Aston Villa
Sitting nine points behind the top seven, Aston Villa have slipped out of the top half and down to 11th place. They are on a three-game unbeaten run, and had slotted in a total of six goals in the process. On last time out, Aston Villa drew 3-3 against Leeds United in the league. They have failed to keep clean sheets in 14 of their former 17 fixtures.


Prediction
Newcastle United look rejuvenated, while Aston Villa have produced some good performances under Steven Gerrards management. It’s believed that it will be a cagey affair.

Aston Villa to be unbeaten
BTTS (Both Teams to Score)

Football English Premier League Aston Villa Newcastle United
(Disclaimer：Any views or opinions presented are solely those of the author and do not necessarily represent those of NowGoal. We disclaim any responsibility and accepts no liability for any direct or indirect loss or damage arising from any inaccuracies.)