The Premier League match at Carrow Road on Saturday will see hosts Norwich City take to the field against Manchester City.


Norwich City
Managing to add seven points from their last five league matches, Norwich City is now 18th in the English top-flight, a point behind 17th place Newcastle United. Two important victories in January against fellow relegation candidates Everton and Watford were followed by a 1-1 draw at home against Crystal Palace on Wednesday night. Norwich City have lost against in eight of their last 12 Premier League games, conceding 41 goals in the process. 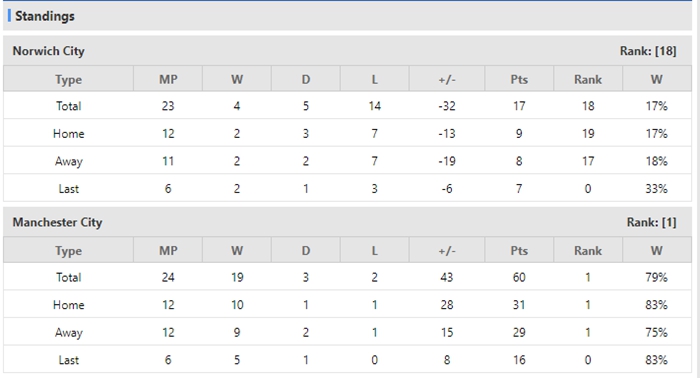 Manchester City
Thus taking forty points from the possible 42 in those fixtures, Manchester City is now twelve points clear of Liverpool on top of the table. After seeing their impressive 12-game winning run come to an end with a 1-1 draw at Southampton, Manchester City returned to winning ways with a routine 2-0 success at home to Brentford on Wednesday night. The team have been unbeaten in their last 11 top-flight games on the road already.


Prediction
Despite lacking a prolific goalscorer, Manchester City have not looked limited in attack. The Premier League leaders, who should have no problems in recording their 20th top-flight victory of the campaign, will be the strong favourites for Saturdays contest.

Manchester City to win with AH -2

Football English Premier League Manchester City Norwich City
(Disclaimer：Any views or opinions presented are solely those of the author and do not necessarily represent those of NowGoal. We disclaim any responsibility and accepts no liability for any direct or indirect loss or damage arising from any inaccuracies.)