Manchester United come up against away side Southampton at Old Trafford in the Premier League match on Saturday.


Manchester United
Manchester United are placed fifth in the table, and they need a surplus of one point to climb into the top-four. They have lost just once in the past fifteen games. But their results have been a bit unimpressive lately as the Devils were held to a 1-1 draw with Burnley. What should be mentioned is that they have consistently found the back of the net. 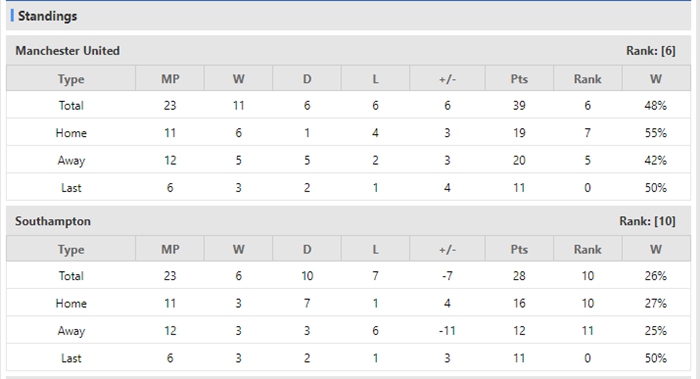 Southampton
Southampton occupy 10th spot in the table with 28 points. They have lost just once in the former nine games. Southampton registered a 2-3 win against Tottenham Hotspurs on the road the past game week. Before that, they shared a 1-1 draw with Coventry City in FA Cup. Southampton’s last eight encounters on the road had three or more goals.


Prediction
Obviously, Southampton are in a good state recently. However, Manchester United still are the better team on paper. And considering their home advantage, expect them to edge out this game.

Football English Premier League Southampton Manchester United
(Disclaimer：Any views or opinions presented are solely those of the author and do not necessarily represent those of NowGoal. We disclaim any responsibility and accepts no liability for any direct or indirect loss or damage arising from any inaccuracies.)