The first game of their best-of-three quarterfinal series between the New York Liberty and the Chicago Sky will take place on Wednesday.

Chicago earned the No. 2 seed in the playoffs after finishing the regular season 26-10. In the last game of the regular season, Chicago defeated the Phoenix Mercury 82-67, snapping the Sky's two-game losing skid. There were 2-1 straight up and 1-2 against the spread against the New York Liberty as the regular season came to a close, with the Windy City winning five of the last eight games. Their highest scorer, Kahleah Copper, averages 15.7 points per game. 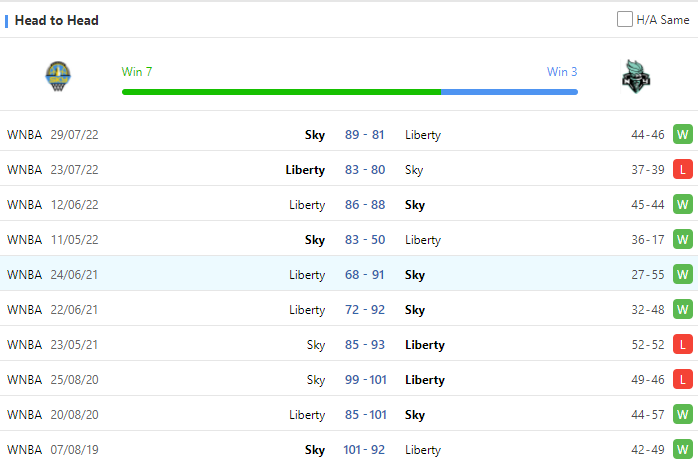 The seventh seed is New York. In order to secure a spot in the playoffs, New York defeated the Atlanta Dream 87-83 to finish the regular season with a record of 16-20. The final three games of the regular season were all victories for New York. With averages of 17.4 points and 6.3 assists per game, Sabrina Ionescu was the player with the most points and assists.

In 12 of the previous 16 meetings between these two Eastern Conference rivals, as well as at 18 of the last 26 games that New York played in Chicago, the OVER has won. During the regular season, Chicago averaged 86.3 points per game while shooting an outstanding 48.1% overall and 34.5% from three-point range.

Omid D 81 Article
I have been working on the NBA for eight years also writing my analysis for a magazine.
See More Article