The first and the second in Portugal Primeira Liga are going to play at Dragon Stadium on Friday night.

FC Porto
They are certainly the top team in the League. After a 0-2 victory over FC Arouca in last game, they have got a eleven-match winning streak. But Porto just sell Jesus Corona and Luis Fernando Diaz Marulanda in transfer window, which has an effect on their offensive. 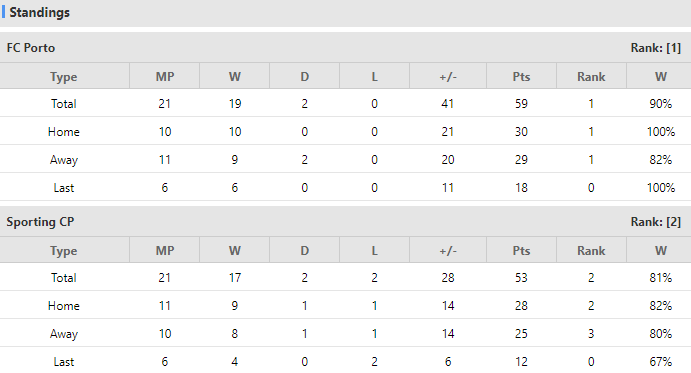 Sporting CP
They won the champion in last season. They rank the second in the table of the League, with six points away from the first. And they even play well in UEFA Champions League, coming into 1/8 Final. However, they have to prepare for European games in few days. They will possibly reserve themselves.

Verdict:
FC Porto got 3W-6D-1L from Sporting CP in the past, which take the upper hand. Besides, FC Porto have home advantage. But FC Porto are not in form for the departure of some key players. So the result of upcoming game is suggested to be a draw.

Football Portugal Primeira Liga Sporting CP FC Porto
(Disclaimer：Any views or opinions presented are solely those of the author and do not necessarily represent those of NowGoal. We disclaim any responsibility and accepts no liability for any direct or indirect loss or damage arising from any inaccuracies.)