Greuther Furth will do battle with visiting side Hertha Berlin at Sportpark Ronhof Thomas Sommer in the Bundesliga 1 meeting on Saturday.

Greuther Furth
Furths recent four-game unbeaten run ended when they lost 4-1 at Wolfsburg in the last round of the competition and morale suffered. The teams defence has not improved much, having conceded seven goals in their last three occasions, and confidence is expected to be lacking. 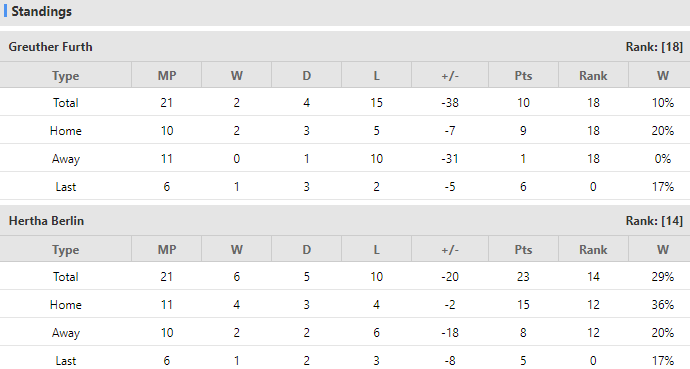 Hertha Berlin
Hertha Berlin have scored in five of their last six games in all competitions, conceding more goals than they have, failing to take three points at home against Bochum and failing to win their last five games in a row, as they have struggled away from home this season.

Verdict:
Hertha Berlin was out of form, but Furth was weaker. The 1X2 first odds is 3.25-3.30-2.20, seems lacked of confidence to the home team. Hertha Berlin should  take points in this game.

Football German Bundesliga Hertha Berlin Greuther Furth
(Disclaimer：Any views or opinions presented are solely those of the author and do not necessarily represent those of NowGoal. We disclaim any responsibility and accepts no liability for any direct or indirect loss or damage arising from any inaccuracies.)