Mainz will be the visitors at Europa Park Stadion on Saturday for the Bundesliga 1 game with home side Freiburg.

SC Freiburg
Freiburg will be hoping to bounce back here after the 1-0 Bundesliga 1 defeat in their last game at the hands of Cologne. It’s not been often in recent games that Freiburg have shown defensive steel. It will be a concern for them that Freiburg have seen their defence breached in 5 of their previous 6 matches, letting in 10 goals in the process. 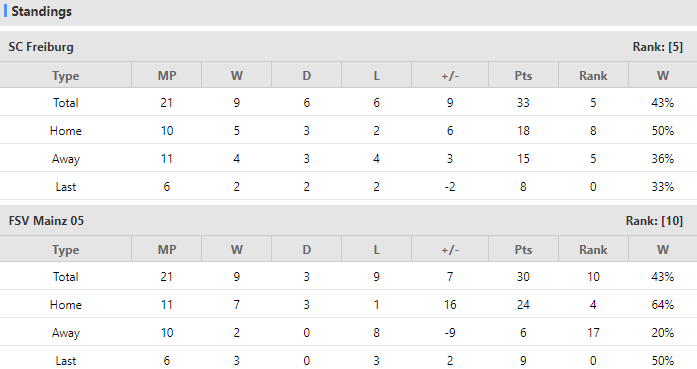 FSV Mainz 05
Mainz will come into the game following on from a 2-0 Bundesliga 1 win as they beat Hoffenheim in their last fixture. During their six latest matches, Bo Svenssons Mainz have found the back of the net a total of 6 times therefore earning them a goals per game average of 1.

Verdict:
We’re envisaging that Mainz will need things to go their way to score goals against this Freiburg team who we think will gain the upper hand. We’ve gone for a very even match with a 1-0 advantage for Freiburg at the end of this game.

Football German Bundesliga FSV Mainz 05 SC Freiburg
(Disclaimer：Any views or opinions presented are solely those of the author and do not necessarily represent those of NowGoal. We disclaim any responsibility and accepts no liability for any direct or indirect loss or damage arising from any inaccuracies.)