Rennes head to Parc des Princes on Friday for the Ligue 1 fixture with home team PSG.


Paris Saint Germain (PSG)
Paris Saint Germain (PSG) are now 13 points clear at the top of the Ligue 1 standings. PSG have been impeccable on the home patch so far in the season with a record of ten wins and a draw in eleven outings. In their previous, PSG enjoyed a 1-5 Ligue 1 victory versus Lille. Before that, PSG shared a goalless draw with Nice in French Cup. 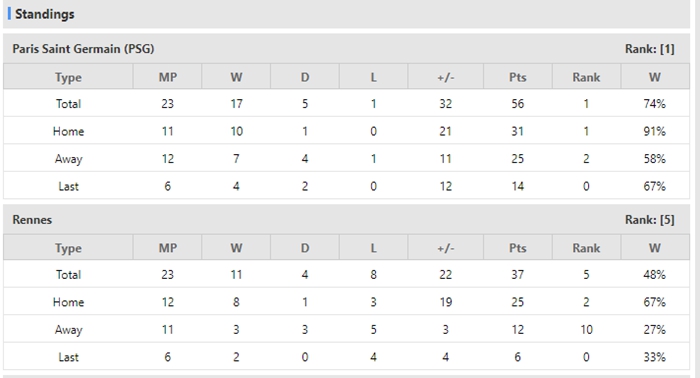 Rennes
Back in October, Rennes shocked the table toppers - who had at that point won all seven of their opening league games. Now, they rank fifth on the standing with 37 points. Rennes picked up an easy 2-0 victory against Brest at the weekend. However, Rennes lost three league games on the trot away from home, a streak that includes a 2-1 defeat at Clermont.


Prediction
PSG will be highly motivated to get revenge for the defeat last time. Messi appears to be finding his feet in France and Mbappe shows no signs of slowing down. So, expect PSG to take all three points.

Football France Ligue 1 Rennes Paris Saint Germain (PSG)
(Disclaimer：Any views or opinions presented are solely those of the author and do not necessarily represent those of NowGoal. We disclaim any responsibility and accepts no liability for any direct or indirect loss or damage arising from any inaccuracies.)