AZ Alkmaar will host Dundee United in the second leg of the third qualifying round tie on Europa Conference League. In the first leg, Dundee United won with 1-0 at home.

AZ Alkmaar have a good start in the new Dutch Eredvisie season with a 2-0 home win over Go Ahead Eagles. And they had only lost 1 but won 5 of last 6 matches across all competitions. Also, they are dominant at home, since they had only lost one of their last nine competitive home games. 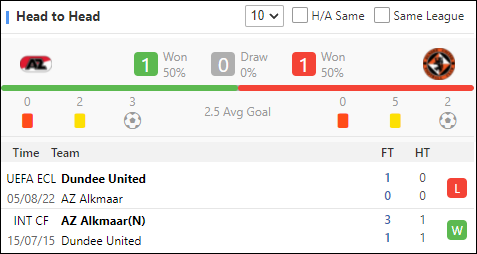 Dundee United finished fourth in the last Scottish Premiership so that qualifed for the Europa Conference League. And they played well in the first leg of this contest, but they had only picked up 1 point in the first two rounds of their domestic League, ranking 9th on table. And they had only won 1 out of last 5 away games across all competitions.

Dundee United failed to have a good start to the new season, while AZ Alkmaar won their first game at the weekend and are always strong at home. AZ Alkmaar would be trustworthy in this meeting.