Glasgow Rangers returned to winning ways after a disappointing 2-0 loss at Saint Gilloise in the first leg by defeating Kilmarnock last weekend, winning the Scottish Premiership clash by 2-0 scoreline. Antonio-Mirko Colak and Alfredo Morelos netted in that match at Ibrox Stadium, with Glasgow Rangers having 4 shots on target. Glasgow Rangers have now won 4 of their last 6 matches across all competitions. It's quite fair to point out that Glasgow Rangers won seven of their last eight home ground matches across all competitions. However, they have not had too much difficulty when it comes to finding the back of the net; they scored 10 times in their last 6 matches. 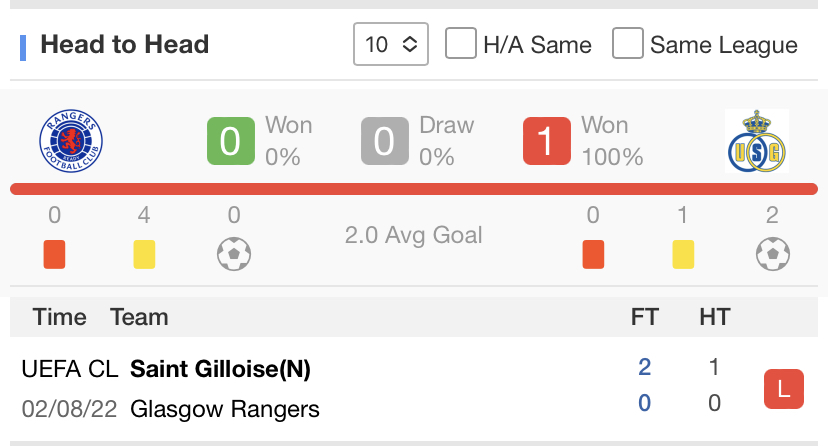 Saint Gilloise have been a difficult nut to crack; although they are coming off a loss, that been their first loss in 9 matches. It's worthy to note, however, that Saint Gilloise won only 1 of their last 6 games away from home soil; they won the reverse fixture of this tie by a 2:0 scoreline at The King Power at Den Dreef Stadium. Saint Gilloise unbeaten streak ended with a 3:0 loss at the hands of KV Mechelen last weekend at Argosstadion Achter de Kazerne. They had 2 shots on target and 5 corners in that First Division A match, earlier to that loss, they were undefeated in 8 matches, with 4 wins and 4 draws. Saint Gilloise will definitely hope to put that loss behind them as they take on Glasgow Rangers. The victors in the duel will have to face either PSV Eindhoven or Monaco in the playoffs.

Verdict: However, considering Saint Gilloise recent struggles on the road, Glasgow Rangers should win this match.