Midtjylland will meet Benfica in another fixture of Champions League qualifying on Tuesday at Cepheus Park Randers.

Midtjylland in their previous match against Lyngby in Superliga drew 3-3. They recently gone through some big scores in the past weeks and the 4-1 defeat from the first leg in the Champions League qualifying leaves them in a very bad shape with regards to getting qualification to the play-offs. Midtjylland are usually a tough side to defeat at home, in their previous 10 home matches they managed to secure 4 wins, 2 defeats and 4 draws while in previous 20 matches across all competitions they managed to record 11 wins, 4 defeats and 5 draws. 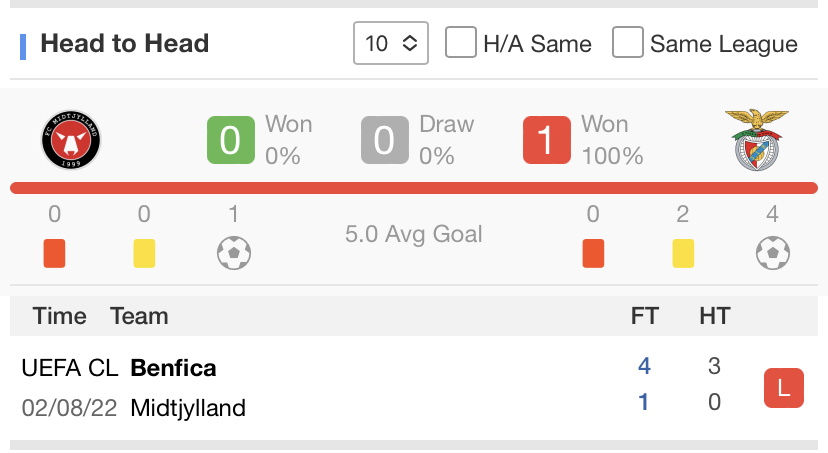 Benfica are looking quite stronger in this new campaign and they have registered back-to-back wins since the new season began in the Champions League including the domestic league. Even though they have not done extremely well in Champions League travel matches, with just a win in the last 6 matches. Anyway, they will be confident of securing their place in the final round of Champions League qualifying when they face Midtjylland at Cepheus Park Randers. Boasting a wide 4:1 advantage, Benfica look well placed to advance to a final play-offs.

Verdict: Benfica kickoff the season in excellent scoring form, but this travel match will be a huge evaluation of their performances. There will be a major challenges and tackles from Midtjylland, who were able to find the back of the net in the first leg. However, home advantage will further help Midtjylland to net a goal in this match. I expect another entertaining contest with goals at both ends and maybe a soft landing for Benfica