The Minnesota Lynx lost to the Seattle Storm 89-77 in their last game. In this game, the Lynx secured 33 total rebounds—28 defensive and 5 offensive. In addition, they committed 14 turnovers while only recording 5 steals in this contest. In the game, Sylvia Fowles had a 60.0 percent success percentage (6 out of 10) in this encounter and pulled down 6 rebounds. 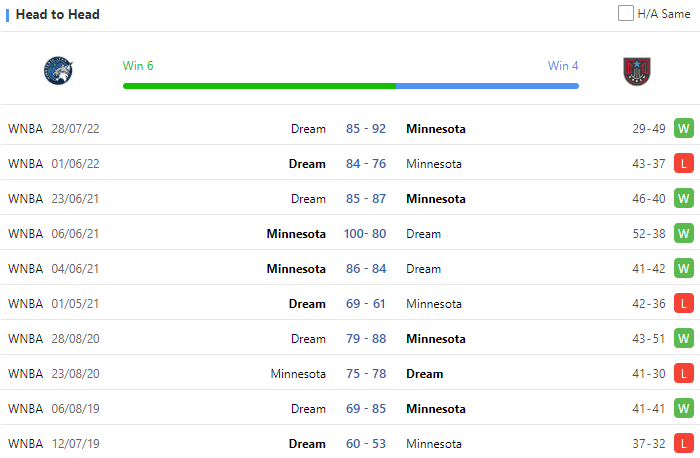 In their last match, the Atlanta Dream defeated the Indiana Fever 91-81. Atlanta finished the game with a field goal percentage of 50.0 (35 of 70) and made 8 of 24 three-point tries. Rhyne Howard scored 20 points in total on 5 of 13 shots. She spent 32 minutes on the court and grabbed 5 rebounds.

The Atlanta Dream have recently been playing stronger basketball, are the superior club in this meeting, and they will carry that momentum into Sunday. Expect Atlanta to dominate a subpar Minnesota club and take control of the game from the first whistle. Pick Atlanta to perform well enough to win and cover in Minnesota while traveling.