Crystal Palace and Arsenal will kick off the new Premier League campaign at Selhurst Park in South London on Friday.

Crystal Palace have had a productive preseason, with ending their tour off with a 4-2 win over French side, Montpellier. they finished their preseason schedule with a 5-2-2 record. Crystal Palace are in good forms, since they kept unbeaten in their final six home games last season and remarkably managed to keep clean sheets in each of their last five. 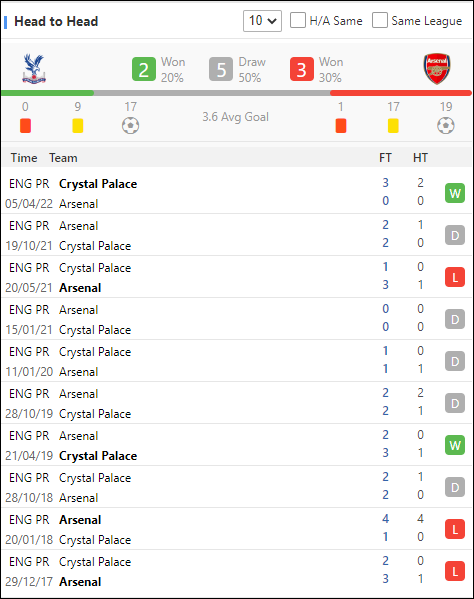 Arsenal played well and won all five of their preseason fixtures, including 6-0 and 4-0 wins over Sevilla and Chelsea. In addition, the team's defensive sides has also been significantly improved since they have completed clean sheets in half of their last 10 games across all competitions.

Arsenal reinforced their attack. With the high morale of the recent 6-game winning streak, I will choose Arsenal as favorite in this battle.

Football English Premier League Arsenal Crystal Palace
(Disclaimer：Any views or opinions presented are solely those of the author and do not necessarily represent those of NowGoal. We disclaim any responsibility and accepts no liability for any direct or indirect loss or damage arising from any inaccuracies.)

Paul James 480 Article
Paul James is a soccer Expert, with his high accuracy predictions, he is often called as the Magic Man. He hopes to make the right picks for people with his knowledge. Believe it or not, it is always helpful to follow him.
See More Article