Eintracht Frankfurt will start their 2022/23 Bundesliga campaign when hosting Bayern Munchen on Friday.

Eintracht Frankfurt won the Europa League last season, but on Bundesliga, the fell behind of Bayern Munchen with 35 points. They performed smoothly in preseason with winning three of four, and they got a big win in the German Cup, beating Magdeburg 4-0. They’ve scored three or more goals in their last three matches and have four clean sheets in five matches. 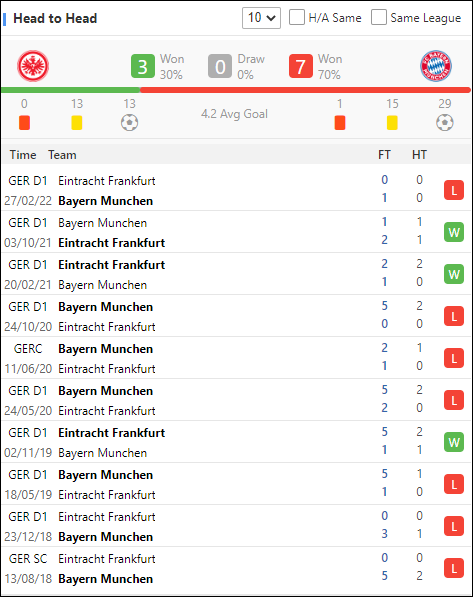 Bayern has also ushered in a relatively large lineup reconstruction this season. Firstly, Lewandowski's departure has put them in a situation where no center is available. So far, they have only spent 20 million euros to sign a newcomer in Ligue 1. They came from a 5-3 win over Leipzig in the Super Cup, but they lost 1 of the 2 preseason matches, when losing 1-0 to Manchester City.

Bayern Munchen could not keep clean sheet in their last five matches, but they have a good scoring ability, while facing a team also with good scoring run. I think both sides to score.

Football German Bundesliga Bayern Munchen Eintracht Frankfurt
(Disclaimer：Any views or opinions presented are solely those of the author and do not necessarily represent those of NowGoal. We disclaim any responsibility and accepts no liability for any direct or indirect loss or damage arising from any inaccuracies.)

Paul James 480 Article
Paul James is a soccer Expert, with his high accuracy predictions, he is often called as the Magic Man. He hopes to make the right picks for people with his knowledge. Believe it or not, it is always helpful to follow him.
See More Article