Columbus Crew will go head to head with Montreal Impact in the clash on USA Major League Soccer.

Columbus Crew' away game against Charlotte FC was called off after 17 minutes due to inclement weather over the weekend and will be played at a later date. They drew New England Revolution with 1-1 in last home game, which has been their second straight match without conceding any goal. Now their unbeaten run has been extended to 9 rounds, with four wins and five draws. 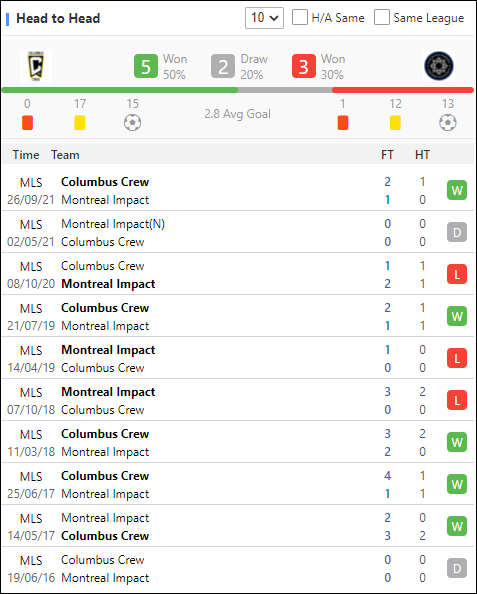 Montreal Impact drew New York City with a 0-0 tiring draw on weekend, after that, they have picked up 2 wins and 1 draw in last 3 rounds.

Columbus Crew are in a 9-games unbeaten run recently, I think they would win again with the home advantage.

Football USA Major League Soccer Montreal Impact Columbus Crew
(Disclaimer：Any views or opinions presented are solely those of the author and do not necessarily represent those of NowGoal. We disclaim any responsibility and accepts no liability for any direct or indirect loss or damage arising from any inaccuracies.)

DaireA 133 Article
I worked as a sports journalist for two years. I am professional in writing previews and commentary under statistics through my work experience. It is my honour to share my views here.
See More Article