Charlotte FC and DC United will go head to head on Wednesday’s MLS.

Charlotte FC had played against Columbus Crew in their last home match but it was abandoned after 17 minutes of action because of inclement weather. They were downed 4-0 away by Toronto FC the previous weekend and have allowed seven goals in their last two league games. Charlotte FC has picked up two wins and four losses in their last six league matches. 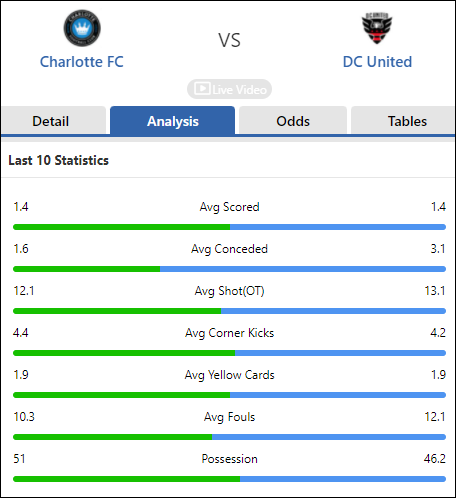 DC United had a 2-1 home win over Orlando City in their latest fixture. The team has won just two of their past 12 league matches, both against Orlando City, with three draws and seven losses.

Charlotte FC has good home run with winning 7 of their 10 home games, while DC United has conceded 9 goals totally in last 2 away games. I'm expecting a home win.

Football USA Major League Soccer DC United Charlotte FC
(Disclaimer：Any views or opinions presented are solely those of the author and do not necessarily represent those of NowGoal. We disclaim any responsibility and accepts no liability for any direct or indirect loss or damage arising from any inaccuracies.)

DaireA 133 Article
I worked as a sports journalist for two years. I am professional in writing previews and commentary under statistics through my work experience. It is my honour to share my views here.
See More Article