The long-awaited Copa Libertadores quarter-final between Atlético Mineiro and Palmeiras kicks off on Thursday.

Atlético Mineiro have been quite ineffective in attack in recent times. Their ‘goals for’ figure stands at just 3 versus opposition teams over their previous six outings. In those games, Atlético Mineiro have also seen the number of goals against them total 8. Nevertheless, time will tell if such a trend might be sustained in this match or not. 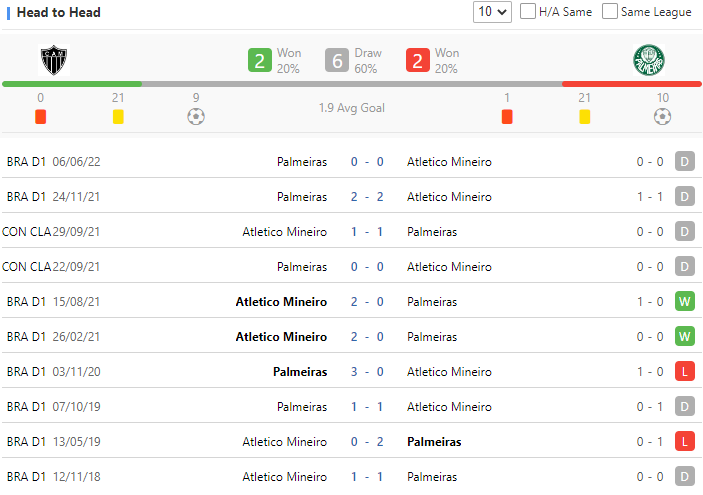 A run of dependable showings from the Palmeiras defence has seen their ‘goals against’ tally standing at 3 from their previous 6 fixtures in total. Over that same time, the number of goals that they have scored themselves is 8.

We’re of the opinion that Palmeiras should get enough chances to put a goal past this Atlético Mineiro side, although that is unlikely to be enough to avoid defeat. We are anticipating a close game with a 2-1 win for Atlético Mineiro after the 90. Let’s see what happens here.

Football Copa Libertadores Palmeiras Atletico Mineiro
(Disclaimer：Any views or opinions presented are solely those of the author and do not necessarily represent those of NowGoal. We disclaim any responsibility and accepts no liability for any direct or indirect loss or damage arising from any inaccuracies.)

Steph.C 370 Article
My name is Steph, I love football games and betting. Outside of the top five leagues, I also have attention to the others because they are more profitable and more exciting.
See More Article