Incheon United and Suwon will meet at Sungui Arena Park in the 26th round of the K League 1.

Incheon United have pickes up 8 wins, 9 draws and 6 losses after 23 rounds, with goal/loss rate as 27/25, being in mediocre offenses and defenses. Their top scorer, Stefan Mugosa, has left the team, after that, Incheon United has only scored 4 goals totally in last 5 matches. 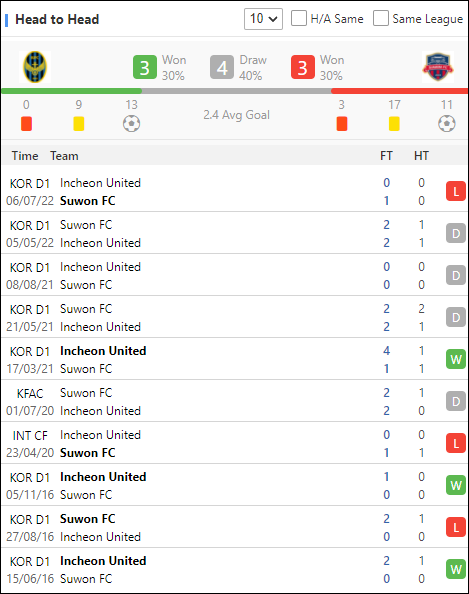 Suwon FC haven’t got a win for 2 rounds after that they drew Daegu FC with 2-2 in last home game. But they remained unbeatable with getting 2 wins and 2 draws in last 4 away games, also, they won the odds in these 4 matches, so they will be expected higher in this round.

Incheon United failed to win any of past 4 meetings with Suwon FC, and the 1x2 odd of this game is 2-3-2, which is not good for the host enough. So I think Suwon FC would be unbeatable in this round.