Cambridge United will host Millwall in the first round of the England League Cup on Tuesday.

After losing to Hull City with 1-2 in Friendly, Cambridge United have suffered consecutive 4 losses in their pre-season schedule. Fortunately, in the new season, they won their first League 1 battle by beating Milton Keynes Dons with 1-0 at home on Saturday. 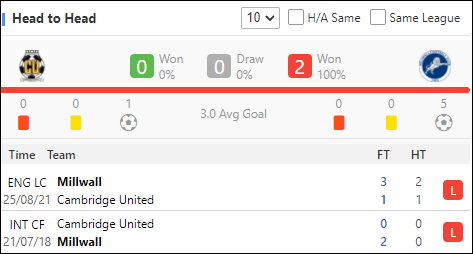 Millwal present us an impressive opening day 2-0 win against Stoke City on Saturday. Now they have remained unbeaten for consecutive 5 matches across all competitions. Also, Millwal have reached the quarter-finals of the FA Cup for four times.

Although both sides have won their first round of the new season, Millwal runs a better overall form. I will be backing Millwal in this meeting.