El Mokawloon El Arab will meet Future FC at Arab Contractors Stadium in the 28th round of the Egyptian Premier League.

El Mokawloon El Arab heads into this match with a goalless draw against Al Ahly, which has been their second draw in last unbeaten 3 rounds.  With 1 win, 6 draws and 3 losses in the last 10 home matches, El Mokawloon El Arab are not dominant at home in this competition. 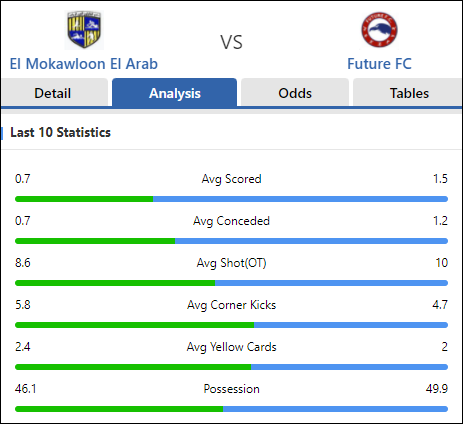 Future FC comes into this round from a 0-1 defeat against Zamalek, thus adding the fourth defeat in the last five games in this competition. Fortunately, their away forms are not bad, for they have won 5 of their last 10 away League matches.

Future FC have strong attack, but their recent forms are not satisfying, so I won’t take a risk and only predict a high-scoring clash.