Jeju United didn’t perform well in recent games. They suffered a 0-1 away loss in last round against Jeonbuk Hyundai Motors, and they had only won 1 of their last 7 rounds. Their defensive problems still exist, as they failed to keep clean sheet for consecutive 8 rounds. Fortunately, they will be faced with Seongnam FC who is at the bottom of Leauge table, it will be a chance for Jeju United to return to winning way. 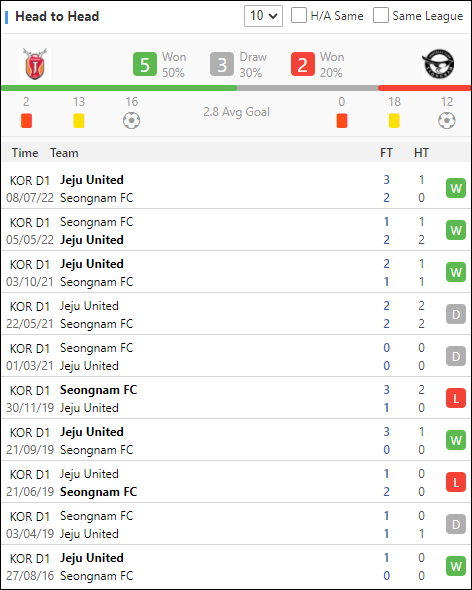 Seongnam FC have been struggling for getting away from relegated in the past several seasons. As the bottom team on table, they once suffered consecutive 4 losses till they beat Incheon United with 3-1 in last home game. Neither of their offensive nor defensive sides couild perform well, since they had scored less than 1 goal in average, and their defenses are fragile.

Jeju United took upper hand on overall strength, and they win all last 3 meetings with Seongnam FC. I will predict a home victory in this round.