Gimcheon Sangmu FC will welcome Pohang Steelers in the 25th round of K League 1 on Tuesday.

Gimcheon Sangmu FC has only got 5 wins after 23 rounds, but suffered 10 losses. They are currently ranking 10th with 21 points. Neither of their offensive and defensive sides could perform steadily, as they only scored 27 goals but conceded 28 goals totally. They have suffered 3 winless rounds in a row after that they were drawn by Suwon Samsung Bluewings with 0-0 in last away game. 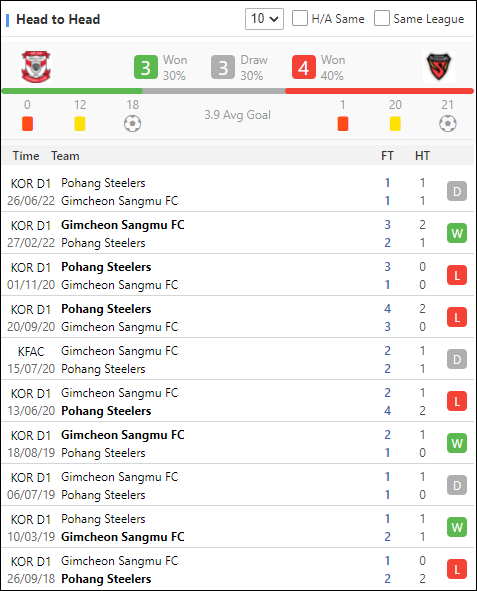 Pohang Steelers are in better forms in this season for they have only lost 6 times after 23 rounds. And they have won 10 rounds since the League, with 74% unbeaten rate. Now they are sitting 3rd with 37 points on table. They have excellent attack, with scoring 32 goals in total, but they failed to win consecutive 2 rounds, including losting to FC Soul with 1-2 in last round.

Gimcheon Sangmu FC have achieved 3W-3D-4L in past 10 meetings against Pohang Steelers, and they ended last meeting with 1-1. Both sides are not in good forms recently, I won’t take a risk and only predict a game without many goals.