On Tuesday night, Monaco will receive PSV Eindhoven for the first leg of their third-round 2022–23 Champions League qualification match.

Monaco were successful in securing third place in Ligue 1 last season. They made a late push for the Champions League slots last season with 9W-1D in the top league. Takumi Minamino and Breel Embolo were signed to permanent contracts by Clement, although his team lost their last two exhibition games against Porto and Southampton after being undefeated in their previous five. 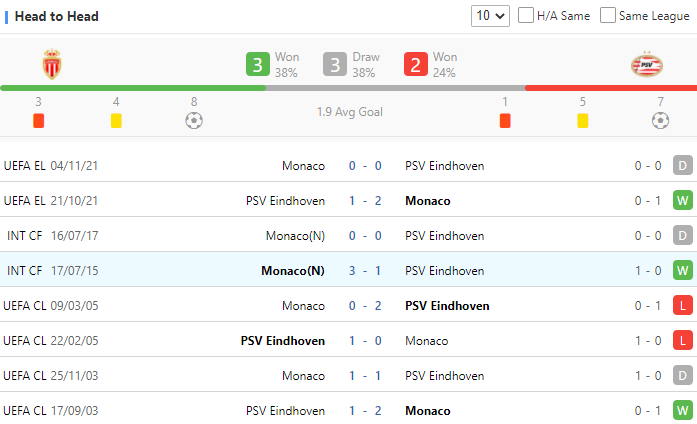 In the most recent Johan Cruijff Schaal, PSV Eindhoven got underway against Ajax with a fierce 5-3 victory. They are the current KNVB-Beker champion and will scent blood at the top of the Eredivisie table now that Erik ten Hag is no longer in charge in Amsterdam, already has one trophy this season, although they were only two points behind Ajax at the end of the 2021–22 season.

PSV's recent match against Ajax left us really impressed. They keep playing irrational football in many different situations. Monaco are only beginning the actual season, are able to upset the visitors. We anticipate a competitive game given the goals of France and the importance of the home field.

Football UEFA Champions League PSV Eindhoven Monaco
(Disclaimer：Any views or opinions presented are solely those of the author and do not necessarily represent those of NowGoal. We disclaim any responsibility and accepts no liability for any direct or indirect loss or damage arising from any inaccuracies.)

Paul James 484 Article
Paul James is a soccer Expert, with his high accuracy predictions, he is often called as the Magic Man. He hopes to make the right picks for people with his knowledge. Believe it or not, it is always helpful to follow him.
See More Article