A clash on K League 2 will be held between Seoul E-Land FC and Gimpo FC on Monday.

Seoul E-Land FC got a 1-1 draw in last home game against Jeonnam Dragons, and their winless run has been extended into 9 rounds. Also, they haven’t win any of last 6 home games in League and lost 2. 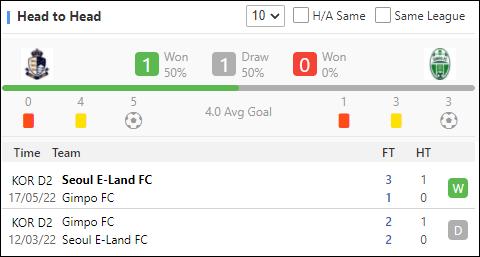 Gimpo FC kept unbeaten for last 5 rounds after that they beat Busan I Park with 3-0 in last away game. And this is their first win in last 9 away League games.

Gimpo FC are in good run recently, but their away forms are bad. So I think Seoul E-Land FC would at least take 1 point.