This weekend at Estadio Nabi Abi Chedid, Bragantino and Juventude will square off in the 20th round of the Brazilian Serie A.

After losing to Fluminense RJ 2-1 on the road in their previous game, they are hoping to get back on the winning track. Now they rank eighth at the table of the League, with three points away from the sixth. They still stand the chance to qualify for Copa Libertadores. 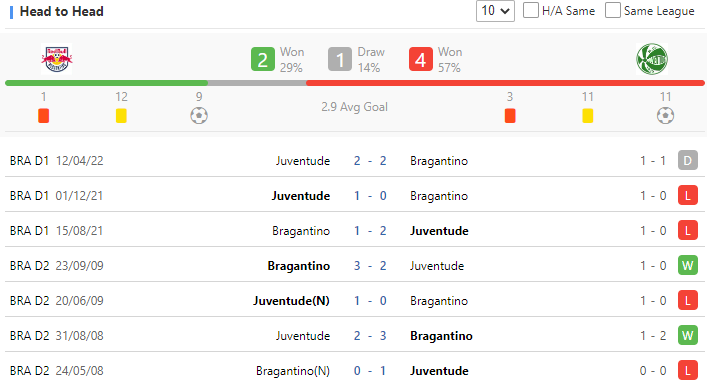 They finished sixteenth in the last season and failed to qualify for Libertadores and Sudamericana. But they play poorly despite that they only play in the League, getting 3W-7D-9L this season so far. In the last game, they got a 1-0 clean sheet from Ceara.

Bragantino take the lower hand over Juventude in the past head to head games with 2W-1D-4L. However, Bragantino have the home advantage. It is time for Bragantino to make revenge in the coming match.

Football Brazil Serie A Juventude Bragantino
(Disclaimer：Any views or opinions presented are solely those of the author and do not necessarily represent those of NowGoal. We disclaim any responsibility and accepts no liability for any direct or indirect loss or damage arising from any inaccuracies.)

Lnn 342 Article
Hi. I am Lnn. My passion for football started when I watched a football game by chance. That made me a fan of The Red Devil. I am happy to write the things what I am interested in.
See More Article