Internacional will be hoping for a better result after the 2-1 Serie A defeat last time out to Palmeiras. Mano Menezes's Internacional have hit the target 10 times in their last six outings. The corresponding tally of goals that have been scored against them in that time is 7. 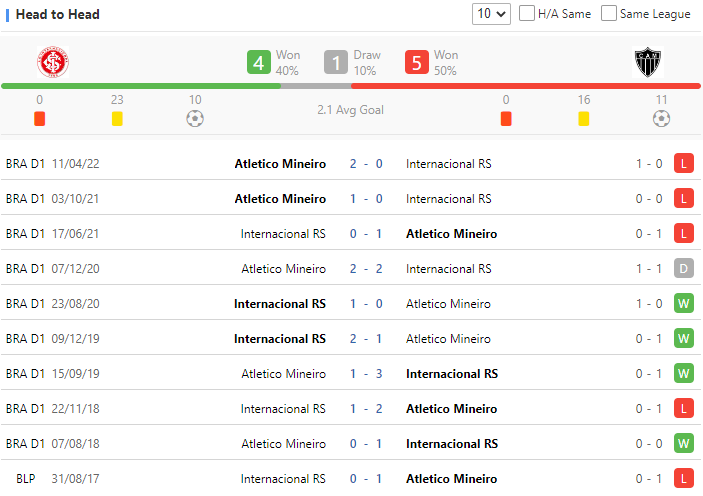 Over the course of 5 of the past 6 games featuring Atlético Mineiro, a notably low volume of goals have been struck between them and their opponents. The overall average goals scored per game during that period comes to a mere 1.5, with the number of goals averaged by Galo standing at 0.67.

Internacional RS has been in poor shape lately. The 1x2 first odds is 2.70-3.00-2.70, seems lacked of confidence to the home team. Atletico Mineiro should take points in this game.

Football Brazil Serie A Atletico Mineiro Internacional RS
(Disclaimer：Any views or opinions presented are solely those of the author and do not necessarily represent those of NowGoal. We disclaim any responsibility and accepts no liability for any direct or indirect loss or damage arising from any inaccuracies.)

Steph.C 376 Article
My name is Steph, I love football games and betting. Outside of the top five leagues, I also have attention to the others because they are more profitable and more exciting.
See More Article