Sunderland A.F.C will play host Coventry City in the Championship on Sunday.

After a four-year career in League One, Black Cat has successfully returned to the Championship. However, Sunderland A.F.C have endured a difficult pre-season with a Friendly fixture that ended in failure to beat Bradford City, Accrington Stanley or Hartlepool United. 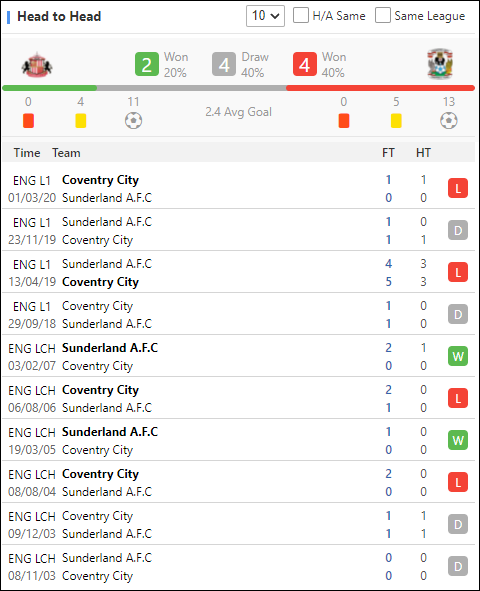 Since returning to the Championship, Coventry City has managed to stay in the League for the past two seasons. Although there are still many problems in their defense, the efficiency of the offensive side is still worthy of recognition. They scored 60 goals totally last season. Also, they got consecutive 5 win in the Friendly games before this new season, with scoring more than 2 goals in each of these games. Also, they have won 5 consecutive away games and kept unbeaten for 9 games recently. Coventry also retained last season's main lineup this summer, and still maintains sufficient combat effectiveness.

It will be a close game, but Sunderland A.F.C have home advantages in this round, so I support the Black Cat would not lose in this round.

Football England Championship Coventry City Sunderland A.F.C
(Disclaimer：Any views or opinions presented are solely those of the author and do not necessarily represent those of NowGoal. We disclaim any responsibility and accepts no liability for any direct or indirect loss or damage arising from any inaccuracies.)