Rayo Vallecano host Real Betis in the first leg of the 2021-22 Copa del Rey semi-finals on Wednesday, with both sides looking to put their league defeats behind them.


Rayo Vallecano
Vallecano are a team that were promoted to the top flight just at the end of the last season. They did start out their 2021-22 campaign on a good note, but recently they have been experiencing some issues with form - and even their streak of good performances here was put to an end. Rayo Vallecano played out a 1-1 draw with Betis when the two sides locked horns in the league last month. Vallecano have failed to find the back of the net at this venue just twice this whole season in all competitions. 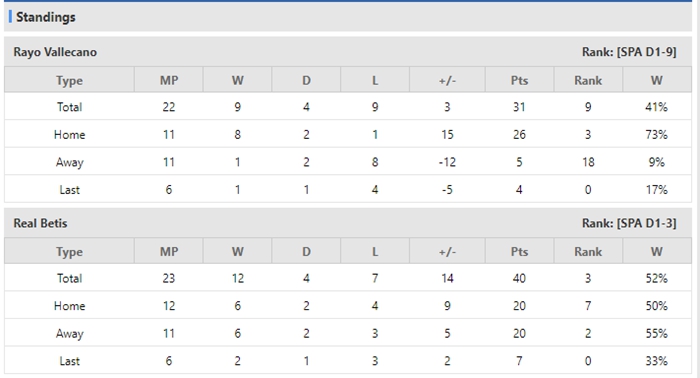 Real Betis
Real Betis are placed third in the table at the moment, trailing only below Real Madrid and Sevilla. They have been in great form lately, and also have delivered some superb performances in previous rounds of the Copa del Rey. Real Betis beat Sevilla 2-1 in the round of 16 before thrashing Real Sociedad 4-0 in the quarter-finals to secure their position in the final four of the competition.

Prediction
The home side held their visitors to a draw just a few weeks ago but a repeat is unlikely, with Betis in great form in the competition. With the envious attacking vanguard, Real Betis should claim the victory.

Betty 571 Article
Betty loves the game of soccer since she was a child, this passion allowed her to embark on a career as a soccer analyst. She believes all leagues have their own charms. Accurate soccer predictions give me a great sense of accomplishment”, Betty said.
See More Article