In the 25th round of the K League 1, Ulsan Hyundai will play against Gangwon FC.

Ulsan Hyundai is the leader of this season. They beat Jeonbuk Hyundai to the top of the rankings by 5 points. The team has the strongest attack in the league, with 33 goals totally since this season. And their defensive sides are stable, since they had only conceded 19 goals totally, which is the team with the fewest goals conceded in the league. In the last round, they defeated Suwon Samsung 2-1 at home. They have won 2 of their last 3 matches, and their state is still stable. 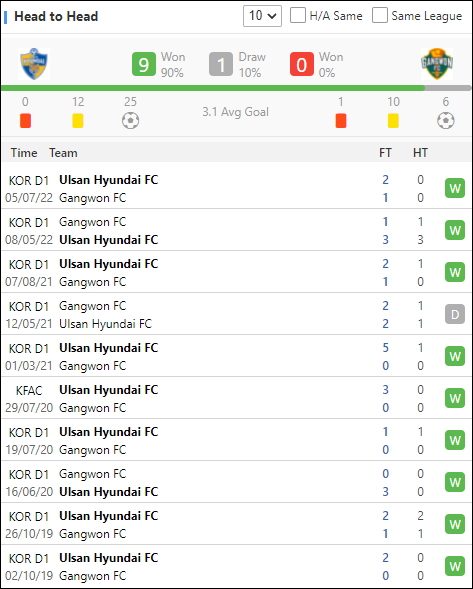 Gangwon FC's performance of this season can be described as quite satisfactory. The team has only achieved a record of 7 wins, 6 draws and 9 losses after 22 rounds, ranking 7th in the league table with 27 points. They still mainly get points at home, but always lose points as away. So far, they have had only 2 wins in last 11 away League matches, and once suffered 4 away losses in a row. The good news is that the team has recovered recently and won 2 consecutive games in thei latest fixture.

Ulsan Hyundai FC won 9 of their last 10 head to head games with Gangwon FC. Both side are in good run recently, but the odds are tending to Ulsan Hyundai FC greatly, so home win is expected here.