The Indiana Fever lost to the Dallas Wings 96-86 in the last game. The Fever managed to collect 29 total rebounds during this game, including 19 defensive and 10 offensive. They turned the ball over 17 times while only managing 6 thefts during the game. Kelsey Mitchell made 13 out of 23 field goals during the game, good for a 56.5 percent clip, and grabbed 5 rebounds. 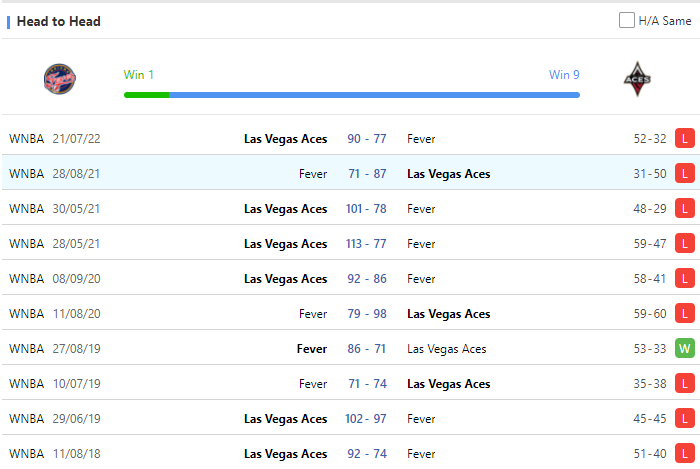 Yhe Las Vegas Aces defeated the Los Angeles Sparks 84-66 last time out. At the end of the game, Las Vegas had a 41.4 percent field goal percentage (29 out of 70) and had made 10 of its 27 3-point tries. A crucial component of the game was Kelsey Plum for making 9 of her 14 shots for 29 points. She played for 35 minutes while grabbing 5 boards.

After winning the Commissioner's Cup on Wednesday, Las Vegas are in the lead in the Western Conference and have won their previous two games. The Aces upset Indiana last week 90-77 but failed to cover as 17-point; however, on Friday, since they will be playing on the road, the spread will be less and they will succeed.