Unión de Santa Fe go into this game following on from a 2-2 Superliga drawn result against San Lorenzo. Over their past six games, Gustavo Munúa's Unión de Santa Fe have seen rewards for their attempts on goal a combined total of 9 times, an average number of goals scored per match of 1.5. 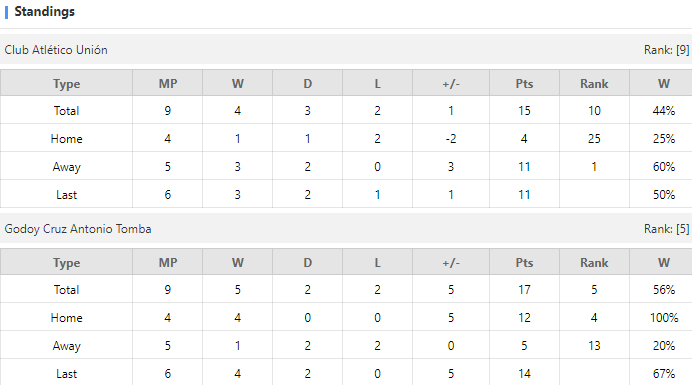 A succession of outstanding displays by the Godoy Cruz defensive unit has seen the number of goals they’ve conceded standing at 3 from their past 6 outings in total. In that period of time, their own attack force has managed to score 8. Let’s see if that trend will be continued on in this game.

We feel that Godoy Cruz and Unión de Santa Fe may well both score, with little between these two teams. Let’s see how this one goes, but it looks this could be a draw. That’s why our selection here is for a tight encounter, finishing with a 1-1 draw at the end of the match.

Football Argentine Division 1 Godoy Cruz Antonio Tomba Club Atlético Unión
(Disclaimer：Any views or opinions presented are solely those of the author and do not necessarily represent those of NowGoal. We disclaim any responsibility and accepts no liability for any direct or indirect loss or damage arising from any inaccuracies.)