Minnesota Lynx lost to the Connecticut Sun 94-84 last time out. For a total of 28 in this game, the Lynx were successful in grabbing 21 defensive boards and 7 offensive boards. They turned the ball over 16 times while only managing 4 thefts during the game. Nikolina Milic had a field goal percentage of 100.0 in this game after making 4 of 4 shots, while also grabbing 5 rebounds. 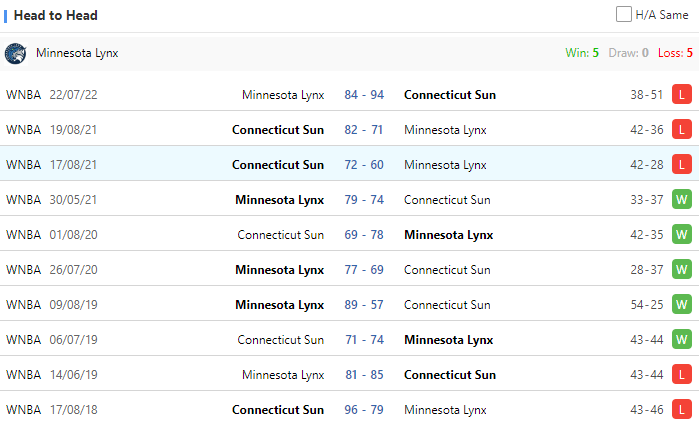 Connecticut Sun took on the Minnesota Lynx and won 94-84 in the last game. Connecticut hit 10 of their 21 three-point attempts, finishing with a 55.2 percent field goal percentage (37 of 67). Alyssa Thomas scored a total of 15 points on 7 of 13 shots. She played for 38 minutes while also grabbing 10 rebounds.

Connecticut outscores Minnesota by an average of 84.7 points per game to Minnesota's 82.8. We predict the Connecticut Sun to triumph in Minnesota on the road since they are 6-4 in their past 10 contests.