On Sunday, Austin FC will host the New York Red Bulls at Q2 Stadium for their first-ever MLS encounter.

With a late stalemate against Dallas last week, Austin FC's undefeated record increased to seven games. With 5W-3D in the first nine games, the hosts have excelled at home. The 22 goals scored in those 9 games serve to reinforce this. Furthermore, it is two more than what they managed while playing three additional games away from home. 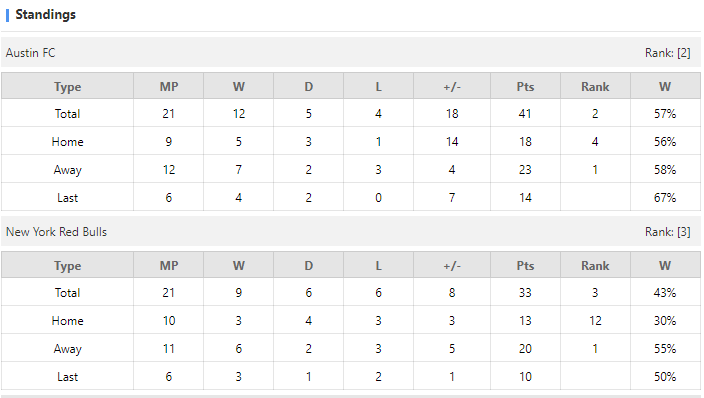 New York Red Bulls are on a two-match after losing 1-0 to NYCFC last time out. Despite being third in the Eastern Conference standings, they had a rollercoaster season. Starting the season off right, the Red Bulls had a respectable road record. However, this is history now, since in the last five games, only one victory was achieved.

Austin are having a great year and appears to be in position to win this game. In six of Austin's nine MLS home games this season, there have been three or more goals scored.

Football USA Major League Soccer New York Red Bulls Austin FC
(Disclaimer：Any views or opinions presented are solely those of the author and do not necessarily represent those of NowGoal. We disclaim any responsibility and accepts no liability for any direct or indirect loss or damage arising from any inaccuracies.)

Paul James 510 Article
Paul James is a soccer Expert, with his high accuracy predictions, he is often called as the Magic Man. He hopes to make the right picks for people with his knowledge. Believe it or not, it is always helpful to follow him.
See More Article