Inter Miami will take a trip to Yankee Stadium for a MLS fixture against New York City on Sunday.

They are only one point behind first place in the Eastern Conference standings. They may even have a shot at the crown this year. They have a three-match winning streak, so they are in good shape. 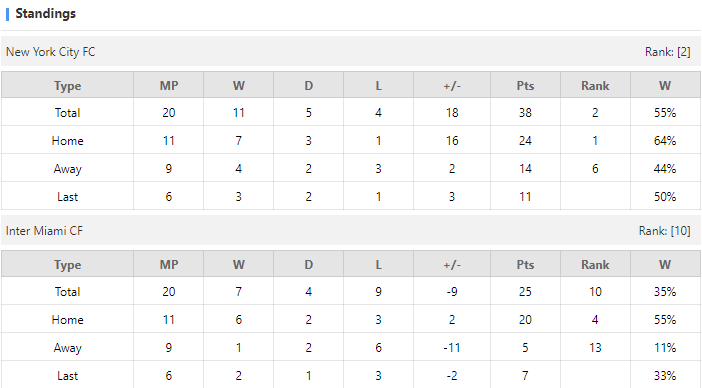 They play poorly in away games, getting 1W-2D-6L, with 0.44 scoring goals and 1.67 conceding goals on average. There is a bad news that Ian Fray will be absent due to injury, which has an impact on their defence.

New York City have the home advantage and Inter Miami are weak in away games. Besides, New York City are on a run, full of ambitions. New York City will probably win in the upcoming match.

Football USA Major League Soccer Inter Miami CF New York City FC
(Disclaimer：Any views or opinions presented are solely those of the author and do not necessarily represent those of NowGoal. We disclaim any responsibility and accepts no liability for any direct or indirect loss or damage arising from any inaccuracies.)