Rosario Central and Newells Old Boys will meet in the Argentine Primera Division on Thursday.

Rosario Central had only picked up 2 wins, 2 draws and 4 losses in the second phase of this competition. Their offensive sides are weak, since they had only scored 3 goals totally in last 8 rounds. But they had solid defenses as they keep clean sheet in 3 of their last 4 home League matches. 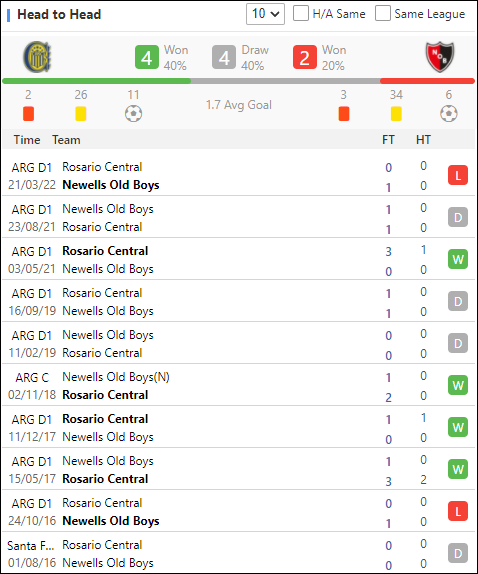 Newells Old Boys has 52% win rate in 23 appearance under the lead of Javier Esteban Sanguinetti. And they performed better in the second phase of this competition, with keeping uneabten in consecutive 8 rounds. But they have consecutive 3 draws recently, after that they were drawn by Racing Club with 0-0 in last round.

Newells Old Boys took upper hand in last 5 meetings with Rosario Central. Rosario Central has some problems on their attack, so I will support the away side in this round.

Football Argentine Division 1 Newells Old Boys Rosario Central
(Disclaimer：Any views or opinions presented are solely those of the author and do not necessarily represent those of NowGoal. We disclaim any responsibility and accepts no liability for any direct or indirect loss or damage arising from any inaccuracies.)

David Garcia 412 Article
My name is Dave, a European soccer enthusiast, I believe all leagues have their own charms. This is the reason why I have been watching and studying those less popular leagues for 20 years.
See More Article