The Serie A tie at Allianz Parque on Monday will see hosts Palmeiras go up against opponents Cuiabá.

Palmeiras, buoyed by their previous result, will be hoping for more of the same after a 2-1 Copa do Brasil success vs São Paulo. Over their preceding six fixtures, Abel Ferreira's Palmeiras have seen rewards for their attempts on goal a combined total of 12 times, an average number of goals per match equal to 2. 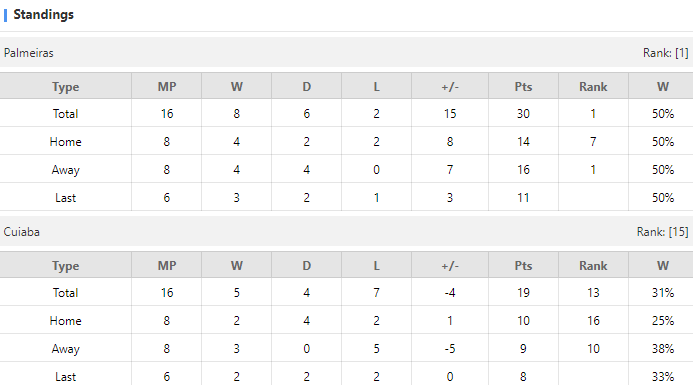 Cuiabá head into the match following on from a 2-0 Serie A win as they beat Botafogo in their most recent game. Over the course of 5 of the previous 6 games featuring Cuiabá, a notably low volume of goals have gone in between them and their opposition. The overall average goals scored per game during that spell comes to a meagre 1.67, with the number of goals averaged by Cuiabá standing at 0.83.

The strength gap between the two sides is huge and there is no suspense. The 1x2 first odd is 1.40-4.33-8.00, which means support the home team. Palmeiras should win this game.

Football Brazil Serie A Cuiaba Palmeiras
(Disclaimer：Any views or opinions presented are solely those of the author and do not necessarily represent those of NowGoal. We disclaim any responsibility and accepts no liability for any direct or indirect loss or damage arising from any inaccuracies.)

Steph.C 376 Article
My name is Steph, I love football games and betting. Outside of the top five leagues, I also have attention to the others because they are more profitable and more exciting.
See More Article