Salernitana
Picking up just 10 points from their 22 matches, Salernitana sit bottom of the table. They failed to return to winning ways two Sundays ago as they fell to a humbling 4-1 loss against Napoli. Prior to that, Salernitana picked up a 2-1 victory over Hellas Verona on January 9, which saw their five-game losing streak come to an end, before losing 3-0 against Lazio six days later. 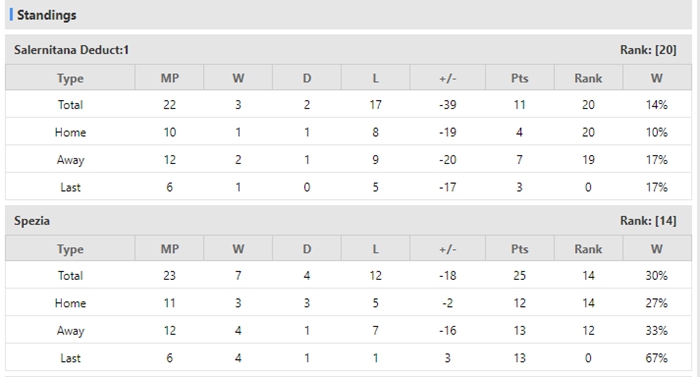 Spezia
Spezia have now won each of their most recent three league games, while picking up four wins from their last five. This fine form has seen Spezia rise to 14th place on the log after claiming 25 points from 23 games. Spezia continued in their rejuvenated form as they claimed a slender 1-0 win over Sampdoria.


Prediction
Spezia head into the game in superb form, claiming three wins from their last three games, while keeping two clean sheets in that time. It’s no doubt that they will be the winner in this game.

Football Italian Serie A Spezia Salernitana
(Disclaimer：Any views or opinions presented are solely those of the author and do not necessarily represent those of NowGoal. We disclaim any responsibility and accepts no liability for any direct or indirect loss or damage arising from any inaccuracies.)