Espanyol are the guests at Estadio San Mamés on Monday for the La Liga meeting with home team Athletic Bilbao.


Athletic Bilbao
Boasting 31 points from their 22 league matches this term, Athletic Bilbao are in eighth place in the league table at the moment and have shown improvement over the course of the season. They are unbeaten in their last three matches. Athletic Bilbao played against Real Madrid and beat them 1-0 in their last match for Copa Del Rey. From the last five matches, the team has scored in four of them and has found wins in three of them. 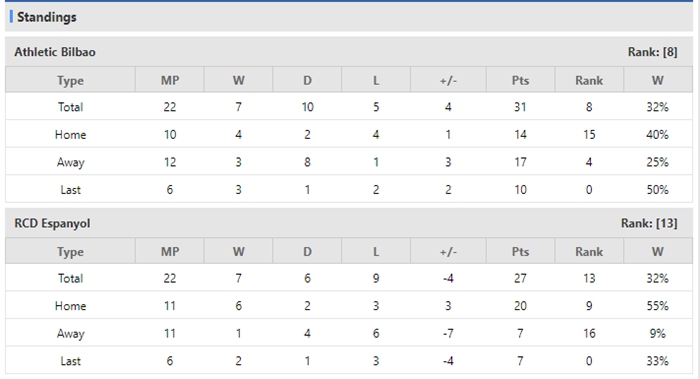 Espanyol
Nine points clear of the relegation zone, Espanyol are currently in 13th place in the La Liga standings and have slumped after a strong start to their campaign. They have not been in action since suffering a 4-1 home defeat to Real Betis on January 21, which made it three league matches without a victory. Espanyol have scored over 1.5 goals in two of their recent wins.


Prediction
Athletic Bilbao have shown an improvement in their form in the recent matches while Espanyol’s form have dipped. The host are the better team at the moment and hold the upper hand this weekend.

Football Spanish La Liga RCD Espanyol Athletic Bilbao
(Disclaimer：Any views or opinions presented are solely those of the author and do not necessarily represent those of NowGoal. We disclaim any responsibility and accepts no liability for any direct or indirect loss or damage arising from any inaccuracies.)