Venezia will be facing visitors Napoli at Stadio Pier Luigi Penzo in the Serie A clash on Sunday. 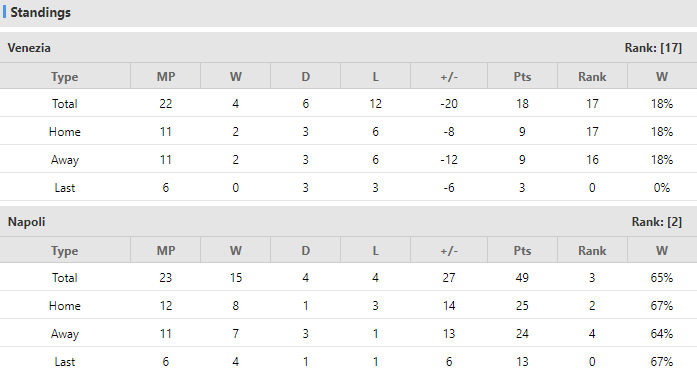 Napoli
Napoli come into this match following a 4-1 Serie A win as they beat Salernitana in their previous match. During their 6 most recent matches, Luciano Spallettis SSC Napoli have found the back of the net 10 times thus earning them a goals per game average of 1.67. Coming into this meeting, SSC Napoli are unbeaten in their previous 4 away league matches.

Verdict:
Venezia would be disappointed if they were not to get a goal against this SSC Napoli lineup, although just one goal might not prevent defeat. We’re going for a 1-2 winning margin for SSC Napoli when the referee blows the final whistle. Looking forward to this.

Football Italian Serie A Napoli Venezia
(Disclaimer：Any views or opinions presented are solely those of the author and do not necessarily represent those of NowGoal. We disclaim any responsibility and accepts no liability for any direct or indirect loss or damage arising from any inaccuracies.)