Greuther Furth will be the visitors at Volkswagen Arena on Sunday for the Bundesliga 1 game with hosts VfL Wolfsburg.

VfL Wolfsburg
VfL Wolfsburg will be looking to improve on their last outing here following the 2-0 Bundesliga 1 defeat in their last game at the hands of RB Leipzig. It has been a rare occasion in recent games where VfL Wolfsburg haven’t conceded. In fact, VfL Wolfsburg have failed to prevent opponents from scoring in 5 of their previous 6 games, leaking 12 goals during that time. 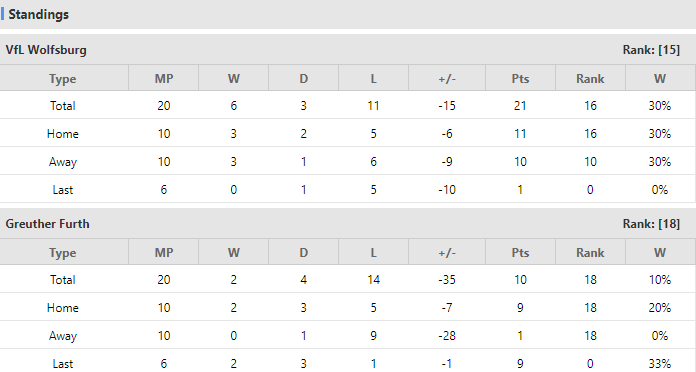 Villarreal
Greuther Furth will go into this clash after a 2-1 Bundesliga 1 win to defeat Mainz in their most recent game. Throughout their 6 most recent matches, Stefan Leitls Greuther Furth have converted 5 times thus giving them a goals per game average of 0.83.

Verdict:
We feel that in this game, VfL Wolfsburg certainly have the ability to get the win and a possible clean sheet when they play Greuther Furth, who might well find it a difficult task getting on the scoresheet. We’re predicting a pretty comfortable 2-0 winning margin for VfL Wolfsburg at the conclusion of the game.

Football German Bundesliga Greuther Furth VfL Wolfsburg
(Disclaimer：Any views or opinions presented are solely those of the author and do not necessarily represent those of NowGoal. We disclaim any responsibility and accepts no liability for any direct or indirect loss or damage arising from any inaccuracies.)