The two sides are preparing for MLS action on Thursday when Nashville play against Seattle Sounders FC.

Nashville hasn't had a great season. The team sits seventh in the Western Conference and has been inconsistent at home, winning just 28 percent. Its most recent league trip to Charlotte, which ended in a 4-1 loss, took a toll on morale. 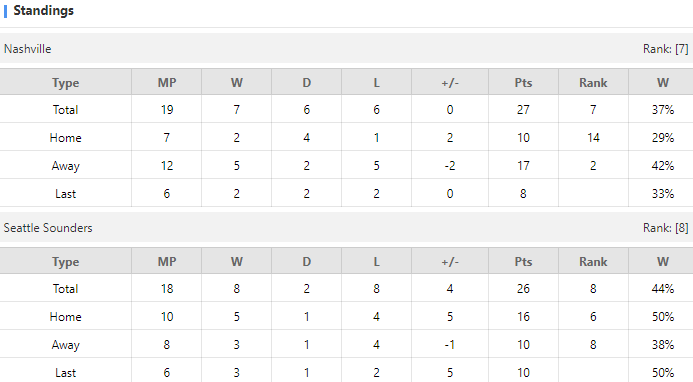 Seattle have suffered a major setback this season, with a record of eight wins, two draws and eight losses from their first 18 league games, and are currently in eighth place. Their most recent home game was a 3-0 defeat to Portland.

Our thinking is that Seattle Sounders FC might need a bit of good fortune to break down this Nashville outfit who we think might well gain the upper hand. With that in mind, we reckon that it will be a very competitive encounter with a 1-0 victory for Nashville when all is said and done.

Football USA Major League Soccer Seattle Sounders Nashville
(Disclaimer：Any views or opinions presented are solely those of the author and do not necessarily represent those of NowGoal. We disclaim any responsibility and accepts no liability for any direct or indirect loss or damage arising from any inaccuracies.)