Oakwell Stadium will host a game between Barnsley and Cardiff City on Wednesday night.

Barnsley
They lose to Bournemouth AFC at 0-1 in last game, suffering a three-match losing streak. So far, they have been winless for twelfth matches. They rank in the bottom of League table. It seems impossible for them to stay in the League next season. 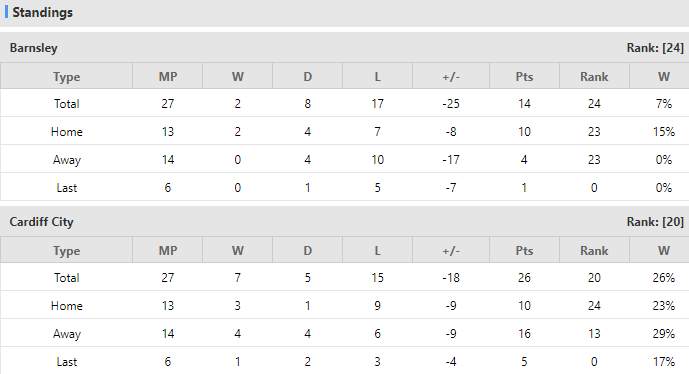 Cardiff City
Instead, they defeat Nottingham Forest at 2-1 in last game, which ends their seven-match winless record and inspires them a lot. They are weak in defensive, with 1.78 conceding goals in average of this season. If they improve that, they will play better.

Verdict:
Cardiff City take the upper hand over Barnsley in past head to head clashes with a record of 5W-4D-1L. What’s more, Barnsley are in poor state now. So Cardiff City are more likely to win in upcoming game.

Football England Championship Cardiff City Barnsley
(Disclaimer：Any views or opinions presented are solely those of the author and do not necessarily represent those of NowGoal. We disclaim any responsibility and accepts no liability for any direct or indirect loss or damage arising from any inaccuracies.)