When Sligo Rovers go to Drogheda United's United Park on Friday, they will be attempting to snap their five-game losing streak away from home.

Drogheda United had to come from behind to draw 1-1 with Derry City last Friday. The team currently has 21 points and ranks eighth in the table after playing 19 games so far with 5W-6D-8L. They are now on a two-game winning run and have gone undefeated in five of their previous six games dating back to last March when they return home. 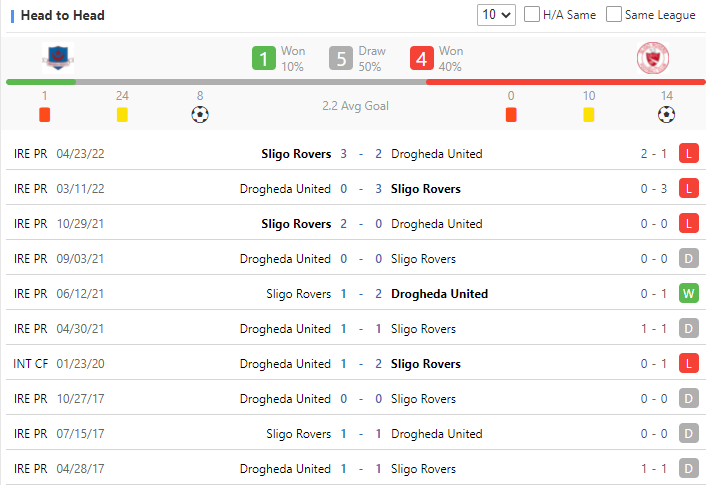 Sligo Rovers defeated Finn Harps 3-0 last time out. They have gone unbeaten in each of their last four matches in all competitions with 2W-2D. However, they have failed to win any of their last five away matches. Sligo Rovers are presently fifth in the league standings with 28 points after 20 games - six points behind Derry City for the last Conference League qualifying slot.

Sligo Rovers have recently had trouble getting going on the road, despite their desire to continue dominating the hosts. Sligo Rovers, on the other hand, have gone four games without a loss, and we believe they will do just enough to earn a share of the points.

Football Ireland Premier Division Sligo Rovers Drogheda United
(Disclaimer：Any views or opinions presented are solely those of the author and do not necessarily represent those of NowGoal. We disclaim any responsibility and accepts no liability for any direct or indirect loss or damage arising from any inaccuracies.)