At the Shelbourne Football Club Stadium on Friday, Dundalk will take on Shelbourne in an effort to win their sixth straight game overall.

Shelbourne suffered a 1-0 loss to 10-man Bohemian last time out. They will be confident that their return home this weekend, where they have won each of their past three games while scoring five goals and allowing one since. They currently have 24 points and rank seventh in the table after 7W-3D-9L of their previous 19 games. 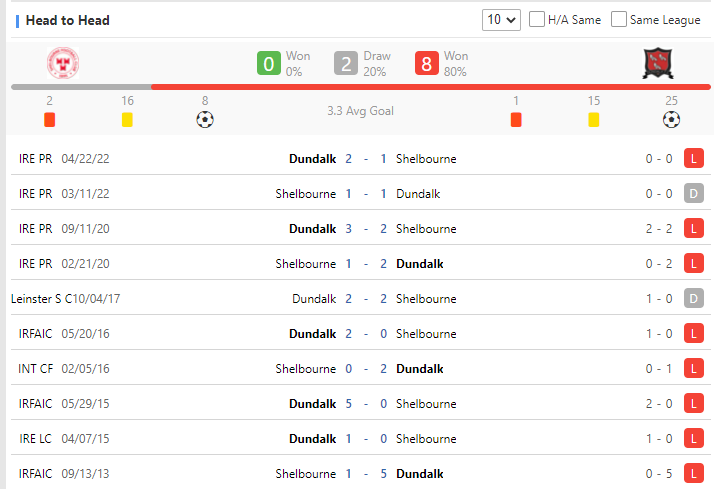 Dundalk defeat Larne FC 2-1 in a friendly match last Saturday. They have won five straight games and are undefeated in their past eight, earning 22 out of a possible 24 points as they return to the league. They presently rank second in the league standings with 37 points from 19 games - five points behind Shamrock Rovers in first place despite having one game remaining.

Shelbourne has been in a rut lately. In contrast, Dundalk enter the game in excellent form, having won six of their last six games and being undefeated in nine. I anticipate a one-sided contest in which the visitors prevail.

Football Ireland Premier Division Dundalk Shelbourne
(Disclaimer：Any views or opinions presented are solely those of the author and do not necessarily represent those of NowGoal. We disclaim any responsibility and accepts no liability for any direct or indirect loss or damage arising from any inaccuracies.)