Gimnasia La Plata
Gimna ' Plata head into this match following a 1-1 Superliga draw vs Platense. Gimna ' Plata haven’t been able to stop scoring goals, netting every time they’ve gone out to play in their last 6 matches. They have totted up the amount of 14 during that period while also conceding a total of 3. Nevertheless, it remains to be seen whether such a trend might be sustained here in this game or not. 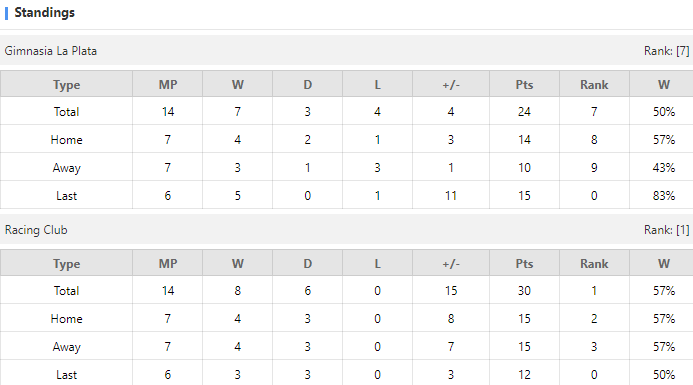 Racing Club
Racing Club head into the match following on from a 2-0 Superliga win with the eclipse of Vélez Sarsfield in their last game. In 6 of the past six clashes involving Racing Club, a notably low volume of goals have gone in between them and their opposition. The overall average number of goals per game during that spell is a mere 1.33, with the average goals for La Academia equalling 0.83.

Football Argentine Division 1 Racing Club Gimnasia La Plata
(Disclaimer：Any views or opinions presented are solely those of the author and do not necessarily represent those of NowGoal. We disclaim any responsibility and accepts no liability for any direct or indirect loss or damage arising from any inaccuracies.)