Inter Miami returns to MLS play on Sunday, having gone undefeated in their last four matches in all competitions, when they face Atlanta United at Mercedes-Benz Stadium.

Atlanta United
The 2-1 lost to Columbus Crew at the end of May ending Atlanta’s streak of 13 consecutive domestic games without a loss at Mercedes-Benz Stadium. Their backline has been shaky so far this season, with a number of key players on the injured list. They've consistently given up an early goal to their opponents, surrendering six goals in the first half-hour of 5 of their past 6. 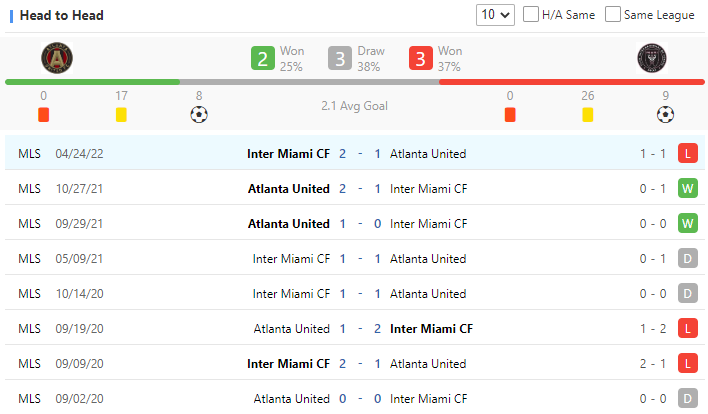 Inter Miami CF
Inter Miami made 2-1 success over Portland Timbers last time out. They are the third-worst club in terms of anticipated goal difference. The Miami have struggled in the final third away from home, going without a goal in three straight road games and scoring only once each time.

Prediction
Inter Miami should win this one based on the current momentum. However, we're going with the Five Stripes due to their strong home form and the Herons' road indifference.

Football USA Major League Soccer Inter Miami CF Atlanta United
(Disclaimer：Any views or opinions presented are solely those of the author and do not necessarily represent those of NowGoal. We disclaim any responsibility and accepts no liability for any direct or indirect loss or damage arising from any inaccuracies.)